We’re proud of our heritage, the occasions we’ve had the opportunity to be involved in, and everything we’ve achieved. If you’d like to learn a little about our journey since we began, we’ve put together our timeline of notable events below. 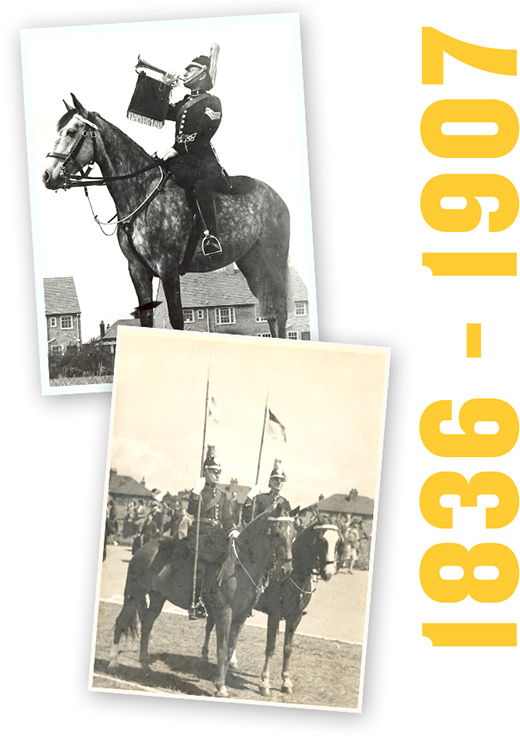 At the time The Liverpool City Police Force was established in 1836, all transport was horse-drawn, including Police and Fire services. So there was plenty of need for our four-legged friends, yet any horses we used were hired from local “jobmasters”.

In 1881, Captain William Nott-Bower was appointed as Head Constable of Liverpool and set about improving and modernising the force. In 1885 his request to form a Mounted and Transport Department was approved.

And so, in 1886, the Mounted Department was formed. The Inspector in charge of the department was appointed direct from the cavalry regiments of the Armed Forces, Troop Sergeant Stephen Sales of the 7th Hussars, at an annual salary of £120.

Superintendent James Nimrod Race, a former rough riding Sergeant Major from the 13th Hussars, was placed in charge of the growing section.

Duties of the section included the transport of prisoners, patrols and crowd control, and any message of urgency or importance would be sent by a Mounted Despatch orderly.

By 1896, the Mounted Section had 36 horses and often assisted other forces. Between 1892 and 1907, recruits for the section came exclusively from the Mounted units of the British Army. The Chief Constable had his own horse drawn transport: in the summer using a “Phaeton”, an open four wheeled carriage, and in winter a “Brougham”, a closed carriage.

The Headquarters of the Section was at Hatton Garden, which was also the HQ of the Fire Brigade, then part of the Police Force. The horses used for pulling the fire engines were so well trained that when the fire bells sounded, the horses were released from their stalls and they fell in, in front of the fire engine waiting for the harness which was suspended from the ceiling to be lowered onto them. Impressively, the whole operation took a matter of minutes, from the bells to leaving the HQ.

There were also stables at Old Swan (Mill Lane), Esk Street and Ivanhoe Road in Aigburth, as well as the Northern Hospital for their horse drawn ambulances. 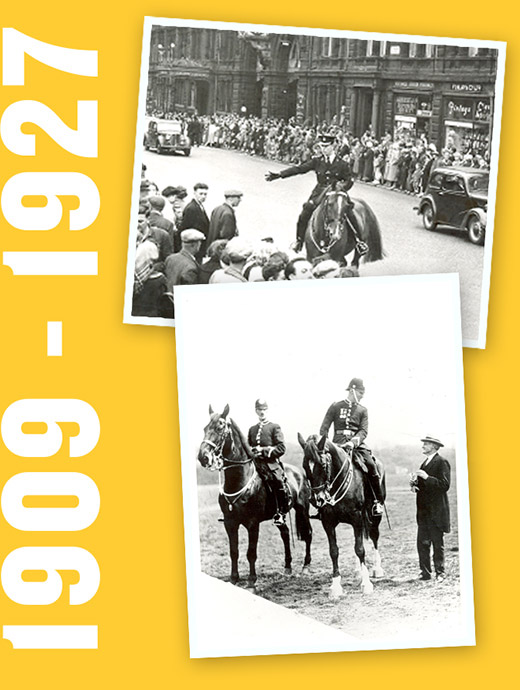 From policing the sectarian riots in 1909 to escorting convoys of food and performing at several Royal Escorts for the King, the Mounted Section undertook many important duties during this time.

In 1914, the section had: 1 Superintendent, 1 Inspector, 7 Sergeants, 54 Constables and 54 horses. Several of the local forces with small Mounted Units, including St Helens, Southport and Wallasey later formed part of our present force.

The advent of the war saw Police, Fire and Prison vans being motorised, and so the days of horse drawn transport were numbered. Sadly, this lead to redundancies, as shown in the Section’s Horse Register:

“Horse No.20 A Chestnut Gelding, 14 years old, sold on the 4th January 1913 for £19.8s 6d, made redundant owing to the introduction of a motor traction vehicle in the prison van service.”

In 1919 the war was over, the value of the motor vehicle to the Section rose, and horses weren’t replaced. By 1924 the strength of the section was reduced to: 1 Superintendent, 1 Inspector, 6 Sergeants, 37 Constables and 44 horses.

The following extract from the Standing Orders of 1926 shows the appreciation that remained for the Mounted Section, despite the cuts: “One mounted man who knows how to do his duty is worth a dozen men on foot, but if he does not do his duty discreetly, he may cause twice as much complaint.” This bold statement holds true to this very day.

The members of the Mounted Section were then required to work a 12-hour day due to added stale duties, whilst the remainder of the force worked 8 hours. During the years following the war, the Section built up a high reputation for their equestrian skills and immaculate turnout. A musical ride of sixteen horses was formed, as well as a Mounted Section vaulting and a skill-at-arms team.

In 1927, the Gladstone Dock was opened by King George V, and once again the Mounted Section provided the escort. 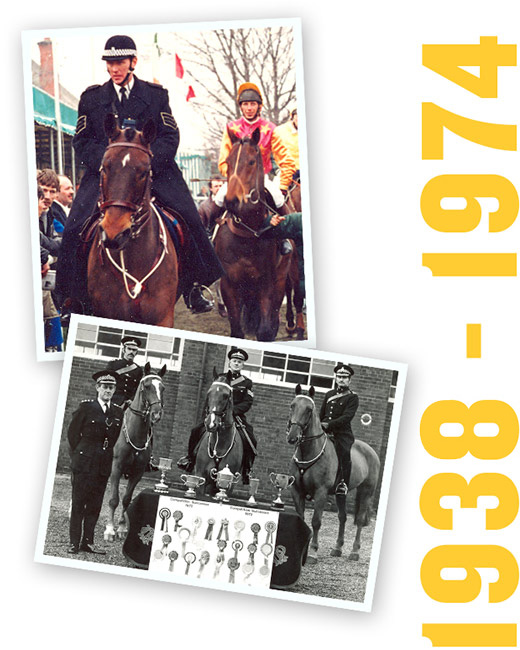 In October 1938, a new more compact and central headquarters for the Mounted Section at Greenhill Road was opened, complete with a large indoor riding school and training field.

It provided accommodation for 29 horses and 24 mounted personnel. During the Second World War in 1939, 27 of the horses were stabled at Knowsley Hall, home of Lord Derby, as a precautionary measure against enemy attack.

Throughout the war, the majority of the Mounted Officers were posted to divisions or joined the Armed Forces. Two members of the section were killed while serving with the Royal Air Force.

After the war normal duties resumed such as local football matches that involved controlling crowds upwards of 70,000. There were also escorts for the Lord Mayor of Liverpool, Orange Lodge Processions and various other processions, and demonstrations to be policed.

From Royal Visits and The World Cup of 1966, to the Civic Reception for The Beatles and parades for Liverpool and Everton Football Clubs, the Mounted Section’s presence was as important as ever.

With the creation of the Merseyside Police in 1974, many more areas needed to be patrolled and so the section took on new responsibilities. For example, the foreshores of Southport, Crosby, Hoylake and West Kirby were ideal for our specialised patrols during the holiday season.